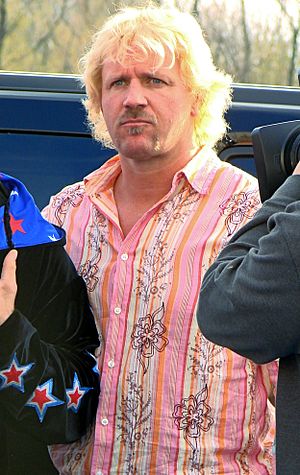 TNA founder Jeff Jarrett spoke with The Dover Post this week to promote TNA’s July 23rd show at the Delaware State Fair. Here are some highlights:

Q You just celebrated your 25th anniversary in wrestling. Where do you see yourself going from here?

A I have to sort of reevaluate myself every year. I took a few years ago off with some personal situations, then got into a series with Kurt Angle. I put him right up there with not only my favorite matches but some of the best. I feel good, my body feels good, but I take it as it comes.

Q You’re a founder of TNA as well as a wrestler. What’s harder: Being behind the scenes or in the ring?

A What comes with more headaches? You’d think in the ring, but out of the ring. My family’s been in business for more than 70 years — whether producing, marketing, working of the TV side of it. There are a lot of ups and owns in and out of ring, but it’s my life’s work, it’s my passion, and when I get on the road truly it is the best part of the business from the time the doors open to close. There are a lot of headaches, like being away from home, but my time at a TNA live event, it’s the best part of my job. It’s the essence of what the business is. You can watch it every week on TV, but there’s nothing like being there live and hearing the fans cheer, hearing them boo.

Q What’s the rush of getting a negative reaction?

A People cuss me out, and that’s even better. They’re passionate. The worst reaction you can get is the sound of silence. I’ve been in the business my whole life, and there really is a yin/yang — there is no evil without good, and vice versa.